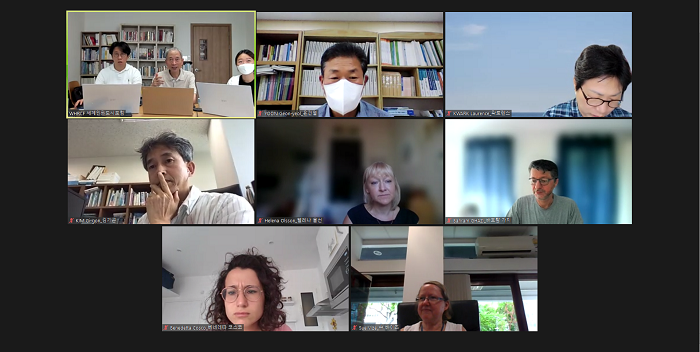 The fourth International Steering Committee Meeting was held online on 30 June. The agenda of the meeting covered discussions about the main invitees to Opening and Closing Ceremony, the Round Table, and the Plenary Sessions 1 and 2. After a 2-year-long period of the WHRCF being focused on online participation due to the COVID-19-related restrictions, one of the goals this year is to revitalize offline participation, especially through inviting overseas speakers to join on-site. Nevertheless, considering the Forum’s participation statistics showing high online participation rate over the past 2 years, during this year’s event also, major meetings will be broadcast live online through two channels.

The discussion began with the talk about the invitation list for the Opening Ceremony and Round Table, both of which are held on the first day of the Forum. Namely, the high officials representing international hosts and organizers will be invited to attend the WHRCF Opening Ceremony for the first time in person after joining hands with the WHRCF in 2020. The invitation to the Round Table will include domestic experts such as professor Hyo-je Cho. Committee member Ms. Laurence Kwark proposed in particular inviting young activists, representing the voices of youth who are the key players in leading the discussions about climate crisis, just transition, and equality,

A fruitful dialogue among the International Steering Committee members also touched the topic of the Forum’s final Declaration and final report. The decision has been made that, rather than presenting the 5 commitments in a Declaration, which has been the WHRCF tradition, a final report focused on sharing the key messages and takeaways from the various sessions is to be prepared. Furthermore, apart from the final report, a plan for establishing 'Local Government Guidelines for Climate Crisis and Human Rights' was discussed in detail. Committee member Mr. Anselmo Lee especially pointed out that an important synergy could be created if Korea could host a COP in the future. However, considering the fact that such guidelines preparation takes a considerable amount of time, a plan was proposed to proceed with the follow-up work on the Guidelines even after the Forum is over, and officially publish it subsequently. In addition, the entire Committee reiterated that all discussions on climate change during this year’s Forum should be conducted from a human rights perspective, not the general perspective, which is, in its core, the added value of the WHRCF.

Moreover, even though it has been already discussed several times, a dialogue on how to actively connect the 2022 UCLG World Congress and the Forum, which are being held at the same time this year, also took place. Due to the connection in crucial topics of human rights, peace, and climate change discussed on the local government level, and as a result of years-long collaboration between WHRCF and UCLG, various cooperation ideas, including inviting a delegation of Mayors who would visit both Gwangju and Daejeon together, are currently being discussed in detail.

The next meeting of the International Steering Committee is expected to be held at the end of July to follow up on the officials’ and speakers’ invitation process, and to look into the detailed operation plan of each session of the 12th WHRCF.