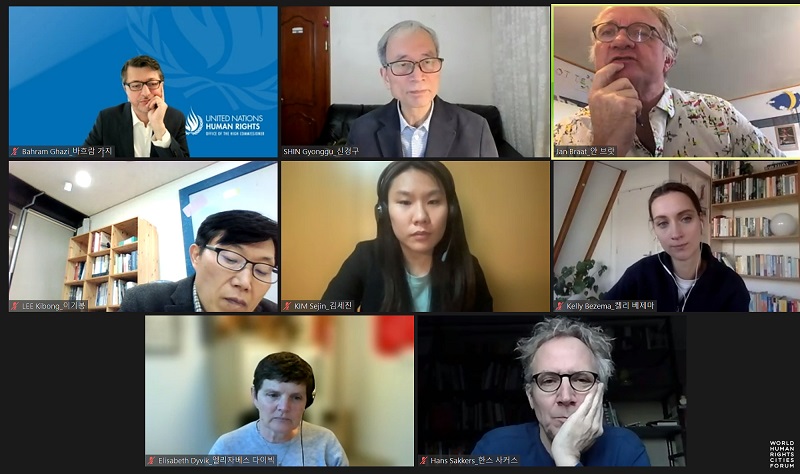 The Second Myanmar Conference was held online last Tuesday, 21 December. Following the First Conference that took place in April 2021, where mainly the first response to the crisis was discussed, the Second Conference aimed to assess the humanitarian crisis caused by the military junta while exploring action plans beyond a public statement. World Human Rights Cities Forum Secretariat and UN Human Rights joined hands in organizing the conference, and partners from the Utrecht City, Forum-Asia, International Cities of Refuge Network (ICORN), and May 18 Memorial Foundation joined. Under the theme of 'Shelter City', the first session of the Conference focused on sharing the experiences of NGOs and local governments, that had already begun to support the human rights defenders and journalists around the world in this matter.

Gwangju International Center’s Director, Gyonggu Shin, opened the session as its moderator. His welcoming speech was followed by a greeting from the Human Rights Officer of UN Human Rights, Bahram Ghazi. In his introductory remarks, Bahram Ghazi mentioned the importance of being consistent and unwavering in showing international solidarity and conducting collective action at a local level to promote and protect the rights of people in Myanmar. He also spoke about the concept of 'Shelter City' as a means to provide protection and secure the dignity of those under threat, while allowing them to continue their work as human rights activists.

Elisabeth Dyvik, Program Director from the International Cities of Refuge Network (ICORN) presented on the topic of ''Working with cities and regions that offer long-term temporary refuge to persecuted writers and artists''. Her presentation included important remarks on ways of dealing with various mental, physical, and other challenges that those arriving to shelter cities might be facing.

Next, Forum Asia’s Human Rights Defenders (HRD) Programme Manager, Sejin Kim, introduced the projects providing long-term shelters for human rights advocates who are unable to return to their home countries. Such programs, she explained, are done through cooperation with universities, human rights agencies, local governments, and similar organizations all across Asia, as she emphasized the importance of establishing such protection programs and systems.

Jan Braat and Ms. Kelly Bezema, Policy Advisors to the city of Utrecht in the Netherlands, shared the reasons why the city of Utrecht became a Shelter City for human rights advocates in the first place, as well as related experiences in a joint presentation. They explained that the experiences mentioned served as an opportunity to identify the current state of the urban human rights situation and to more actively discuss human rights, especially through projects that provide shelters for human rights activists both nationally and internationally.

May 18 Memorial Foundation Secretary-General, Kibong Lee, briefly introduced the foundation and its various domestic and foreign activities related to human rights promotion and solidarity projects. He also presented diverse projects that are conducted to support human rights activists and promote democracy and human rights not only in Korea but all across Asia, as well.