Recent flooding in Korea fills the news and media these days. Although this was due to the monsoon season, I have never seen such huge flood in my life since arriving in Korea fifteen years ago. I also saw less cars then, and summers were not as unbearably hot like recently. It is obvious that climate change has begun to show its impact directly. Yet I saw some hope that there is some change going on; I saw more businesses trying to shift their products to be more eco-friendly, and almost all of the places I’ve seen the change at were initiated by young people. It is true that many young people are taking more active role against climate crisis in Korea. One of such examples is the “Youth Climate Emergency Action”. It is a rather new group consisting of young people in their 20s. As in their website, they describe themselves as “a non-violent direct-action group against the climate crisis.” These young people are not climate experts, but rather ordinary people like you and I with one ultimate goal that is to realize climate justice among countries, regions, classes, generations, genders, and species. They demand drastic reductions in greenhouse gases and other transformations from countries and big companies.

Another unique point from this group is their ever-present dinosaur mascots, whom they named Kim Gong-ryong (Gong-ryong means “dinosaur” in Korean). The mascot, representing a species that has gone extinct because of climate change, is present every time they go out to the streets, giving them more impact and curiosity to passersby. With around 30 members, they are a rather small group, but even though they are small in number, they know a small thing goes a long way. We met Lee Na-gyeong, one of the members and activists, who will be present at the 12th World Human Rights Cities Forum, to learn more about the group. Below is our interview. 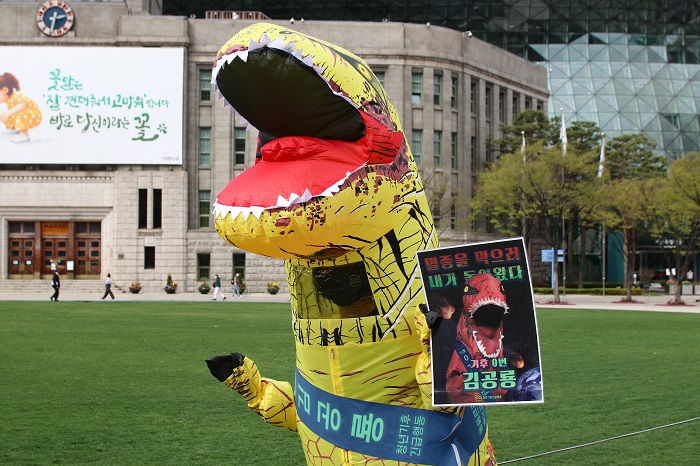 Gwangju News (GN): Thank you for agreeing to conduct this interview! Your group's name, "Youth Climate Emergency Action-Kim Gong-ryong and Friends", is quite peculiar. Could you please let us know the reason why you chose the name and what are your goals and mission?

The other name, ‘Kim Gong-ryong and Friends’, is intended to arouse curiosity. It is a name that conveys a political message and our identity in a fun way. It contains the message, “If this continues, we will become extinct just like the dinosaurs!” We know the causes of endangered species. It is because the capitalist system that exploits nature and pursues growth without considering the limits of the earth. The meaning of ‘friends’ was to convey that various young people are working together against the climate crisis.

Our goal is to achieve climate justice and make responding to the climate crisis a top priority for our society. In the face of climate disasters that have become a daily routine, it is necessary to imagine that a different world is possible. We want to create a better society that saves the earth and lives, not a system that causes a climate crisis. The reality is that we keep getting blunt and weary and turn away from it. Facing the climate crisis, informing people, and working together on a climate movement are also major goals. 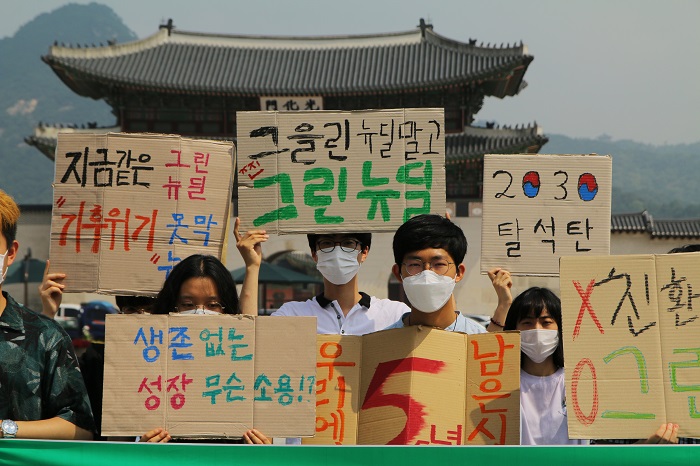 GN: Being made up of passionate young people in their 20s and 30s, your group seems to be full of ideas and strong in action. We are curious about what specific activities you are doing and what tangible achievements you have had in the meantime.

Lee Na-gyeong: “Let’s create climate politics” during the election season. In order to convey the message of ‘let’s vote on the promise to save the planet’ and to approach the citizens in a friendly way, ‘Climate No. 0 Kim Gong-ryong’ ran for office. We also made our own pledges, hoping that the climate movement would reach people intuitively. The climate crisis is an urgent issue, but it is of no use if citizens do not see and listen.

Youth Climate Emergency Action is a non-violent direct-action group. We meet citizens on the street, but we also take direct action in front of politicians and businesses to convey our needs. I met with the Minister of Environment in person and met with the directors of KEPCO and delivered a letter telling them to stop investing in overseas coal. When the National Assembly pushed for the Gadeok-do (Gadeok Island) New Airport Special Act, I went to Busan and protested in front of Democratic Party lawmakers. In order to prevent the export of coal power plants overseas, I protested in front of the Dusan office building, shouting, “Stop greenwashing, stop exporting coal power plants while saying they are an eco-friendly company.”

The climate disobedience trial revealed that the current legal system is protecting corporate profits rather than preventing the climate crisis. I think it was an opportunity for many people to be angry at the greenwashing of large corporations and to learn about the problems of the judicial system. We need an 'ecological law' to protect public life and the earth, not a law that favors the vested interests of a few.

Another achievement of our group is the subjectivity of ‘youth’. Even at our regular meetings, there are many cases where the younger generation is usually portrayed as pitiful beings who have to be protected and used as a plausible folding screen. The reality is that the youth is given only false promises and not decision-making rights. The achievement of the Youth Climate Emergency Action is that rather than just being quiet, we stepped up to become an uncomfortable and troublesome presence in front of the vested interests. 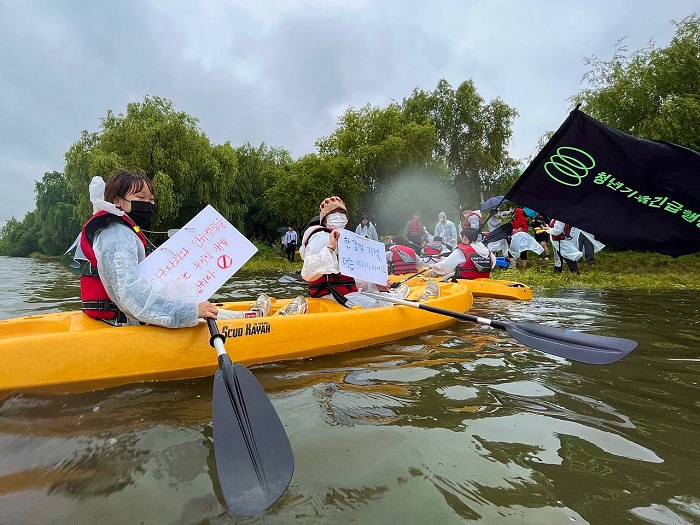 Lee Na-gyeong: The seriousness of the climate crisis seems to have become universally recognized now. As a result, there are many practices that are being carried out while considering the earth and the environment. There are many young people who try to reduce carbon footprint by buying upcycled products, going vegetarian, not buying new clothes, and throwing out less trash. It does reduce carbon emissions. However, hundreds of millions of tons of greenhouse gas are emitted by one coal power plant alone. There are more than 50 coal power plants in Korea, and now Korean companies are building new coal power plants in Vietnam and Indonesia. So can you imagine? No matter how hard I try personally, the system that relies on fossil fuels and destroys the livelihoods of local people does not change. As citizens are concerned about the climate crisis, it is natural that the government should radically regulate carbon emissions. The climate action of young people demanding to shut down coal power plants and switch energy comes naturally .

Actually, the dreams of young people who are involved in the climate movement are often simple. I want to live happily, I want to become a grandmother safely. But in the face of the climate crisis, all that is impossible. Even if I work very diligently, I will not be able to achieve such a dream if Korea is flooded and drought comes in 2050.

The climate crisis that takes away the right to dream of the future and even the right to live in a safe home is a human rights crisis. Once one realizes that for a society where human rights are guaranteed, a better world, so that one can live safely and peacefully, the society needs to change, there is no other way but to take climate action. There are many young activists who say that their ‘climate depression’ has been alleviated while taking part in the climate change movement. The thoughts about climate crisis that used to daunt me alone, now I think through with fellow colleagues, we meet and speak out together, which gives me strength to live through the climate crisis. 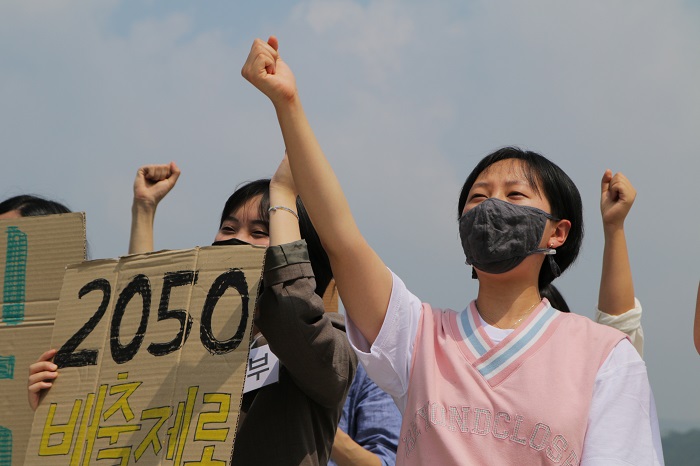 GN: The 12th World Human Rights Cities Forum will be held from October 10 to 13 under the theme of ‘Climate Crisis and Human Rights’. You will be attending the Forum’s Round Table session on behalf of young Korean climate activists, could you share with our readers briefly what do you plan to focus on during your presentation?

Lee Na-gyeong: Now, it is necessary to specifically present to ‘whom’ and ‘what’ damage has been done, as well as and ‘what’ needs to be solved to make changes. Whenever a climate disaster strikes, the absence of public systems that our society has neglected is exposed. There are those who benefit and those who suffer from the unequal capitalist system that has caused the climate crisis, but it is easy to predict who is less affected in the face of the climate disaster.

There is a common perception that in order to respond to the climate crisis and live eco-friendly, we have to give up the happiness that we enjoy, and that the quality of life will decrease in the future. However, protecting the quality of human life and ecosystems most definitely are not the polar opposites of such future, rather coexist with it. Looking at the fact that an unequal society is also one of the causes of the climate crisis, we can see that a more egalitarian society and climate crisis resolution accompany it.

The structure that caused the climate crisis is the same as the structure that prevents the guarantee of equal human rights. A system that pursues endless economic growth destroys nature, just as it exploits humans for profit. Eventually, it went beyond the limits of the earth and caused the collapse of the ecosystem. Without talking about this structure, we also cannot talk about an alternative. Therefore, the climate crisis cannot be viewed as a change in the natural environment unrelated to humans, and it cannot only be looked at as the extent to which nature must be protected and preserved. Considering the climate crisis as a human rights issue, I think we can say a lot about what we can do as citizens, what changes are needed in politics, and what role the state should play.

GN: To conclude this interview, do you have any message to our readers?

Lee Na-gyeong: When thinking of the climate crisis, there will be many people who are in despair. They say that we have 10 years left before the average global temperature rises by 1.5 degrees. So will we all die in 2030? But even after that, life goes on. We desperately need a safety net to protect us from typhoons, heat waves and wildfires. There is a saying “the climate will deteriorate, but society will not collapse”. As I said before, I think it is really important to believe that a different world is possible and that citizens can make that change. I hope that through the World Human Rights Cities Forum we can imagine and make a different world a reality. Thank you.

Introduction and translation by Karina Prananto.