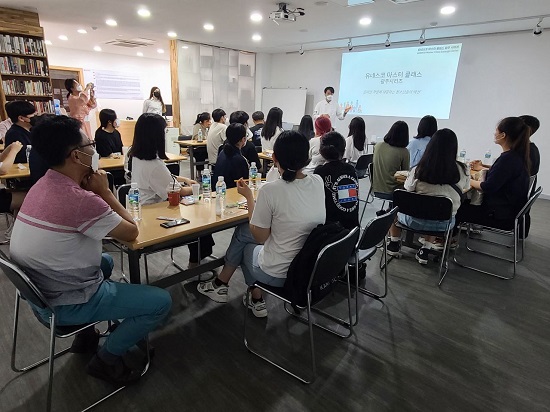 UNESCO Master Class Gwangju Series was officially launched on 8 August 2022 at the Gwangju International Center. The Master Class Series initiative, that first began in 2019 at the UNESCO Headquarters in Paris, is an educational program that empowers the youth to become pioneers leading the change in battling racism and discriminations in their own schools and communities. The youth participating in the ‘UNESCO Master Class Gwangju Series’ will be exploring the issues surrounding the rise in online hate speech together with various local and international experts, including those from UNESCO, and over the period of about 2 months are expected to implement their own team projects focusing on raising awareness and proposing solutions in response to the related issues.

The opening day welcomed 25 participants in total - 20 high school students and 5 teachers currently affiliated with schools in Gwangju. On the day, the participants gathered at the Gwangju International Center for the Orientation, during which both students and teachers about to take on roles of facilitators had some time to get to know each other through icebreaking games. The Orientation program included detailed explanation of the project background and objectives, specific guidelines for its implementation, as well as special meeting with other UNESCO program participants for the students, and ‘Facilitators Workshop’, especially prepared for the teachers by Mr. Nika Bakhsoliani, Chair of Board of Human Rights Education Youth Network.

The second day, 9 August, was reserved for Master Class Workshops, and consisted of full-day schedule conducted online, through which the participants got the opportunity to meet and discuss with local and international experts on the subjects of racism, discriminations, and online hate. Among various programs were Chungnam National University Department of Media Information Professor LEE Seungseon's special lecture on ''Online hate speech'', freelance journalist Raphael Rashid's talk on ''Personal Experience about Racism and Hate Speech'', and Lausanne office for immigrants integration officer Mr. Bashkim Iseni’s discussion entitled ‘’How do we become racist?”. UNESCO coordinator who first created the ‘Master Class Series’, Ms. Linda Tinio, also joined and presented the history and achievements of the Master Class since its onset in 2019, as well as the basic mechanisms underlying discrimination, and Ms. Angela Melo, UNESCO Social and Human Sciences Sector Policies and Programmes Director sent her special greetings on the day through a video message.

Divided in 5 teams of 4, and each supported by 1 teacher-facilitator, the youth participants are currently in the process of creating their own action plans to combat online hate. The implementation of the projects will take place over the period of the following 6 weeks, and the results shall be presented at the 12th World Human Rights Cities Forum, where a jury of experts will choose 1 best team to represent Gwangju City at the 2023 Global Master Class in UNESCO Headquarters at Paris, France. The financial support for the roundtrip to France will be awarded by the Gwangju Metropolitan Office of Education.

The 1 best team will be officially awarded at the 12th World Human Rights Cities Forum’ Closing Ceremony, which is when the UNESCO Master Class Gwangju Series project for the year 2022 will officially come to an end.