Gyonggu Shin, Chair-person of WHRCF International Advisory Committee introduced the Conference and the Mayor of Gwangju, Lee Yong-sup, delivered opening remarks, and stated “in any situation, the power based on armed forces and violence should not be accepted – this is the value of democracy and peace and human rights, and that’s why we have to stand together to support these universal values”.

The session covered the theme of accountability and provided a space to share the experiences of cities and countries that fought against oppression of diverse causes, including Gwangju that continued to fight toward justice and human rights based on principles of truth-finding, prosecution of the culprits, compensation for victims, and restoration of their honors among others. Moderated by Morten Kjaerum, Director of Raoul Wallenberg Institute of Human Rights and Humanitarian Law, Daniele Rumolo, OHCHR Expert on Myanmar, Anh Jongcheol, Vice-Chairperson of May 18 Democratization Movement Truth Commission, Jasminko Halilovic, Director of War Childhood Museum in Bosnia and Herzegovina, Hanifa Girowal, Former Deputy Governor of Kabul and Yan Naing Htun, Director of South Korean chapter of Myanmar’s National League for Democracy, intervened in the discussion.

Daniele Rumolo, OHCHR Expert on Myanmar, gave an overview of the current situation in Myanmar and highlighted that “this conference provides an avenue for the voices of the people of Myanmar to be heard and for their opposition against an attempted military coup to maintain the hope of freedom and return to democracy.”

Anh Jongcheol, Vice-Chairperson of May 18 Democratization Movement Truth Commission, shared his experience during the May 18 Democratization Movements, how the foundation and work of the Truth Commission is playing an important role in uncovering the truth behind the Movement and shared the plan to prepare and announce a national report on the truth-finding by the end of the year.

Jasminko Halilovic, Director of War Childhood Museum in Bosnia and Herzegovina, shared the lessons learned from the example of Sarajevo, which was under the longest siege in the modern history, and explained ways how suffering cities can receive help and support from other cities and communities during and after the war. Moreover, based on his recent experience visiting Kiyv, he gave an overview of current situation there and highlighted the relevant issues that refugees from Ukraine face in Europe.

Hanifa Girowal, Former Deputy Governor of Kabul, emphasized the importance of not being forgotten on the international stage and shared her thoughts on how sister cities network can help tackling the humanitarian crisis around the world, especially in the context of protecting womens’ rights in Afghanistan.

Yan Naing Htun, Director of South Korean chapter of Myanmar’s National League for Democracy, presented the situation in Myanmar with recorded statistics on human violations throughout the country since last year February, highlighting the situation of internally displaced people and refugees. He also talked about how spirit of Gwangju helped some regions to still continue fighting for democracy.

Amanda Flety Martinez, Coordinator of UCLG-CSIDPHR, delivered three main outcomes (as below) and concluded by underlining “the key role of local governments for the democracy movement, better protection of human rights in all aspects and international solidarity with other territories facing similar repressions”.

Three main outcomes from the Session 1:

1. Key element of the discussion was that local government can be a key stakeholder during the conflict, and can be a voice of the people to denounce the human rights violations and inform on what happening locally by collecting the evidence and making visible repression.

2. The importance of building on the past experience of cities who face military repression and conflict, to force the role of local governments in the local and global peace-building.

3. Role of local governments after the conflict, to build back peace and foster international solidarity to build human rights culture, work on truth, reconciliation, memory and compensation of victims. 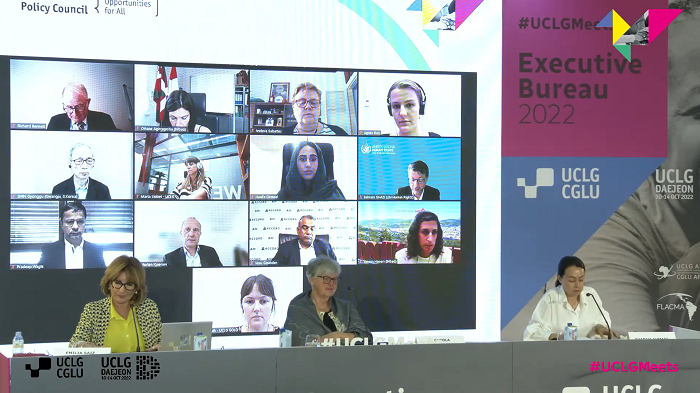 Session 2 was integrated into “UCLG Municipal Peace Talks: Local governments roles & solidarity in times of international crisis”. The Mayor of Sala and Vice-President of UCLG for Europe, Carola Gunnarsson, introduced the session with UCLG Secretary General, Emilia Saiz, by addressing the migration crisis, and stating “We, the local and regional governments, are on the frontline to support and integrate refugees. It is our common responsibility all over the world.”

As Vasu Gounden highlighted, “the UCLG Municipal Peace Talks are an important initiative, because city-to-city solidarity brings people together, not just politicians.”

Richard Bennett gave an overview of the current situation in Afghanistan, where human rights are at risk, especially those of women and girls. Khadija Ahmadi, former mayor of Nili, highlighted the active role of community for the international community and called other local and regional governments to give Afghan refugees the chance to grow and develop their potential in their communities, to build peace. Hanifa Girowal, Former Deputy Governor of Kabul, emphasized three main issues that the country is facing while in the hands of Talibans: the human and humanitarian crisis in Afghanistan that should not be forgotten on the international stage, women being progressively eliminated from all spaces of social life, and the risks taken by Human Rights defenders.

Moreover, Shin Gyonggu explained the importance of a truth commission based on the experience of the Gwangju’s uprising in 1980, and explained the success of the movement with the strict demonstration of solidarity between local organizations and civil society.

Mohamed Wajdi Aydi, Mayor Councillor in Sfax, presented the migration situation in Tunisia, where the unstable political circumstances weaken the local response to the migration crisis they are facing. Thousands of people die trying to cross the Mediterranean Sea, and this situation takes the appearance of a new type of war. The cooperation with UCLG, and Lampedusa brought precious help to the table.

Emilia Saiz concluded by underlining solidarity, partnerships and dialogue as three UCLG pillars to build peace, and Carola Gunnarson stated that “Peace, democracy and gender equality are the cornerstones to build a sustainable society.”

(summary of Session 2 was kindly provided from UCLG)