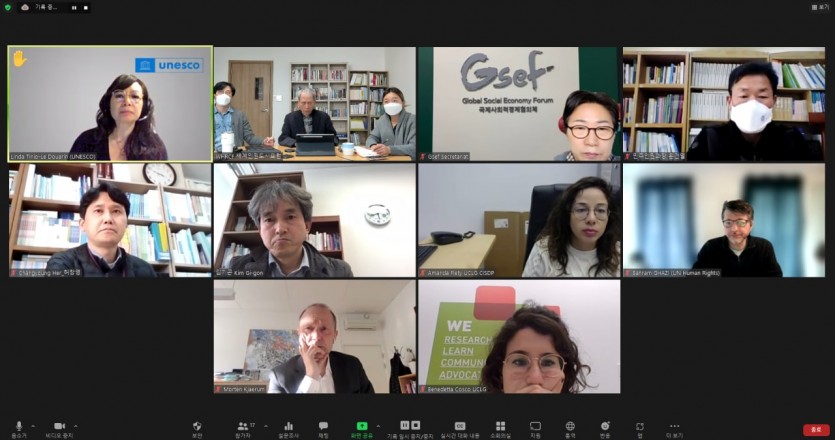 ​The Second International Steering Committee Meeting was held online on 5 April. The Committee members shared their opinions on the first draft of the concept note drafted by KIM Gi-gon.

KIM Gi-gon opened the meeting and briefly introduced the background, goals, and main agendas of this year’s theme - “Climate Change and Human Rights”. He said climate change is one of the biggest threats to human rights and a sustainable future, and therefore a variety of information and best practices on climate change response will be shared. Each of the International Steering Committee members was then asked to take the floor and share their invaluable opinions and insights from both local and international perspectives, which are to be included in the concept note.

Amanda Martinez added that the concept note should highlight the role of the local governments in depth, as well as make a point of the human rights city perspective, such as the impacts of climate change on the right to life.

Linda Tinio-Le Douarin remarked that the concept note should reflect and emphasize the fact that cities are at the forefront of the climate crisis, as well as explain the role of the human rights cities and other networks together with the international community.

Bahram Ghazi also stressed the importance of international solidarity, and mentioned that the concept note should present a very clear aim of what is to be achieved through this year’s Forum as well as not to miss to link the agenda with other global discussions, including Special Rapporteur reports, UN Sustainable Development Goals (SDGs), etc.

KWARK Eun-kyung pointed out that by looking into specific challenges that local governments might be facing, and sharing relevant best practices, a particular guideline on resolving climate change-related issues can also be developed as one of the Forum outputs.

HER Chang-young stated that the outcome of the Forum should be more tangible, and the concept note should clearly show that the will present is not reflected only in the narrative, but also in specific guidelines.

SHIN Gyong-gu, the International Steering Committee’s chairperson, concluded the discussion by stating that all of the opinions will be reflected and incorporated into the revised version of the concept note and the draft will be circulated for final review in the near future.

The next third meeting of the International Steering Committee will be focused on making the programme for the 12th WHRCF.