Before we knew it, the last day of the 2022 Pyeongchang Peace Forum came. Unfortunately, due to the return train schedule, we could not avoid but attend all the final day’s sessions, including the Closing Ceremony, online. The Pyeongchang Peace Forum was held at the Alpensia Resort, where the Pyeongchang Winter Olympics were previously held, and the location itself was not that easy to access. Nevertheless, the event organizers made sure to offer additional shuttle buses in order to make it more convenient to reach the KTX train station, so the shuttle bus boarding platform was busy from the early morning. It seemed that many other participants found themselves in a similar situation to our Secretariat members, so it would be a safe guess that, due to that, the number of online participants increased in comparison to the previous days. 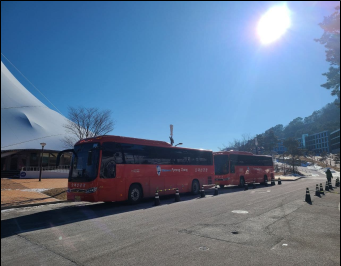 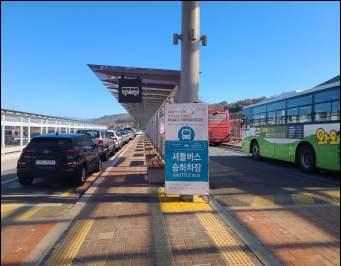 Keeping in mind that due to the ongoing COVID-19 pandemic it was not easy for general audience to join in the Forum at the venue, it was notable that the event hosts and organizers paid great attention to enabling easy online participation.

Actually, just by clicking the "Forum Live" pop-up notification on website’s main page, you could to join in the sessions without any sort of prior registration or time-consuming log in procedures. Online live-streaming was categorized by the session venue name, so one could watch almost any session in real time, as if being on-site, by choosing the meeting room of the desired session in the under the ‘Forum Live’ drop-down menu. Furthermore, below the broadcast video on the page, one could also view the entire day’s schedule of sessions taking place in the particular conference room, saving one the trouble of having to separately download the ‘Program Book’ and have it open at all times. Also, right underneath it, links to the official YouTube channels were placed for those who might be wishing to participate in real-time chat. The fact that the various opinions exchanged in the real-time chat window on YouTube were gathered and stored made it convenient to go back and read them all together, however, it was at the same time somewhat confusing, since a reader who might have tuned in for a later session could not distinguish which Q&A belonged to which session. Simultaneous Korean-English interpretation was provided through separate Korean and English channels, so all one needed to do was just simply choose the preferred language. 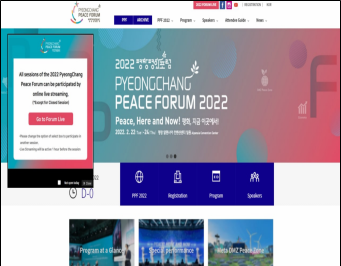 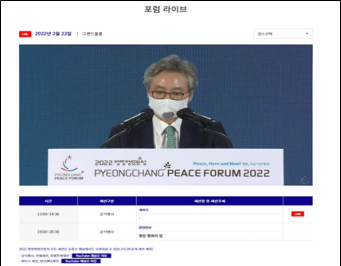 During the Wrap-up Session, the last day’s first session that lasted for about 30 minutes, Anselmo Lee, the coordinator of the Asia Civil Society Partnership for Sustainable Development (APSD), and Younggil Lee, the international advisor of the Geneva Institute for Leadership and Public Policy (GILPP), not only went over the contents discussed during this year's Forum and its milestones and future prospects, but also mentioned the Forum’s main five agendas (economy, sports, DMZ Peace Zone, UN Sustainable Development Goals (SDGs), and Pyeonchang public diplomacy) and the related sessions, as well as briefly shared their opinions on them. 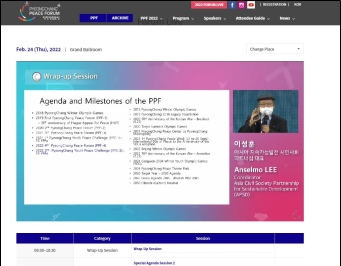 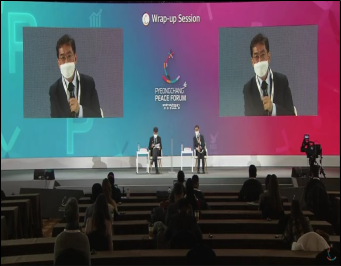 During the session we anticipated the most, the Special Agenda Session 2 - Analyzing the Success Potentials of the Gangwon 2024 Winter Youth Olympic Games based on the Diagnosis on the Olympic Winter Games Beijing 2022, both the closing of the Pyeonchang Forum, and the preparation process and future outlook of the Gangwon 2024 Winter Youth Olympic Games, another important event to be held in Gangwon-do Province two years later, were discussed. In particular, details were shared about the supporting programs for countries without winter sports infrastructure, which clearly differentiates the goals of the Gangwon 2024 Winter Youth Olympic Games. The key points delivered at the beginning of the session were focused on the idea around inviting youth from “countries without snow”, and providing them with training for the Olympic Games in advance. Judging by the questions from several international participants in the audience during the Q&A, the topic seemed to have sparked interest. One of the questions, "Isn’t two years’ time too short of a period to be fully prepared for the Olympics?", posed by a Spanish participant, was met with the following answer. "Of course, two years is not really enough to be prepared perfectly. However, the purpose of this project is to provide opportunities for teenagers to receive such training as early on in their lives as possible, and to have them not only to continue training once they return home, but also to help in creating a training system in their home countries for future generations, rather than solely to have them win first place.“ 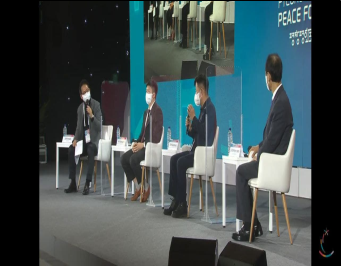 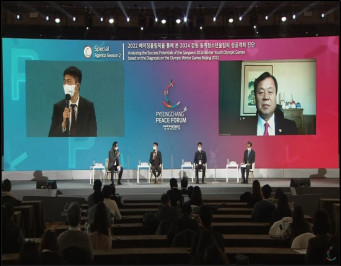 The 2022 Pyeongchang Peace Forum had especially emphasized the role and participation of youth and MZ generation, which could also be felt at the Closing Ceremony. The Youth Peace Challenge Awards Ceremony and the winners’ acceptance speeches that marked the introduction part of the Closing Ceremony, also marked how the youth participation played a big role in this year’s Forum. Youth from all over the world explained that the entire process of talking and dwelling on "peace" was an experience far more precious than winning the award itself. The three-day Forum was finalized with Art Lindsley, co-president of the 2022 Pyeonchang Peace Forum Organizing Committee who attended the Closing Ceremony online straight from the United States, reading the Forum declaration, and with screening the Forum highlight video. 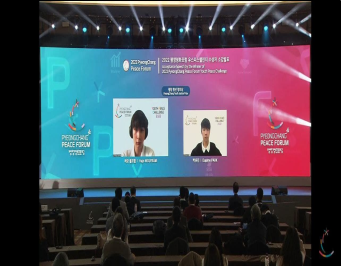 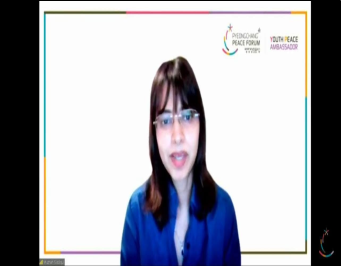 On the first day when we arrived to Gangwon-do Province to attend the Pyeongchang Peace Forum, harsh winds and a fierce snowstorm came upon as if winter had started again. However, on the day when we headed back to Gwangju, the sun shone brightly again as if the cold had never even been there. Perhaps the snowstorm was the last of this year’s winter just before the warm spring came? With the hope that the harsh winds will soon stop, and the warm spring of peace will come all around the world, we are finalizing our 2022 Pyeongchang Peace Forum Review.