The morning of the second day of the Pyeongchang Peace Forum dawned. The outside was cold due to the infamous fierce winds of the the Gangwon-do Province and the temperature of minus 8 degrees Celsius. Nevertheless, everyone seemed to have forgotten about the cold inside the Forum venue, which had been busy with many people and warm since the morning. 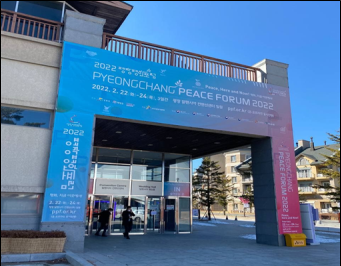 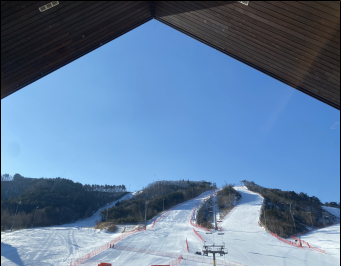 The behind the scenes story of the former women's ice hockey player, Suji Cho, who spoke about the Pyeongchang 2018 Olympics’ unified Korean women’s ice hockey team and their brief cooperation, as well as the story of KOICA’s Former Vice President, Jinho Song, and the importance of pursuing peace that is liberated from nationality and capital as a global citizen made us think deeply about the true nature of peace. However, due to the fact that the two out of the total of five panelists did not keep their presentations within the designated time, the latter part of the session ended somewhat in a rush, which definitely left us with a lot to be desired, since we were greatly looking forward to this specific session. 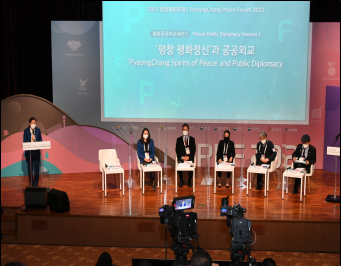 What we also anticipated greatly this time was the special performance of the New York Philharmonic String Quartet. The New York Philharmonic Orchestra which previously visited Pyongyang in 2008 and through its meaningful musical performance opened the door of exchange between the USA and North Korea while dreaming of peace on the Korean Peninsula, this time in the form of a String Quartet and under the theme of “Play Peace”, shared messages of comfort and peace through hopeful melodies of Schubert, Mozart, and Beethoven

They shared the touching story of the “Arirang” performance, which they also performed at the Forum’s Opening Ceremony. Namely, after performing “Arirang” as the finale of the Pyongyang performance, all the artists shed tears and could not leave the stage for a while. While reminiscing on this once more in Pyeongchang, they spread the dream of peace on Korean Peninsula yet again. This inspired us to also try to come up with various ways to convey the meaning and the message behind the World Human Rights Cities Forum to its participants on a more profound emotional level.

During the UN Peace Education at DMZ session that followed starting from 3 p.m, the fact that Korea has very few institutions that carry out UN-related international peace activities compared to its high world rankings in various fields (11th in the world's economy, and 6th in military power) was mentioned. Furthermore, since the only peace training institution (PKO Center) currently is in the Korea National Defense University, an interesting proposal was made to host the PKO Center and UN-related organizations in the DMZ International Peace Zone in Gangwon-do Province in order to provide peace education for people all around the world. 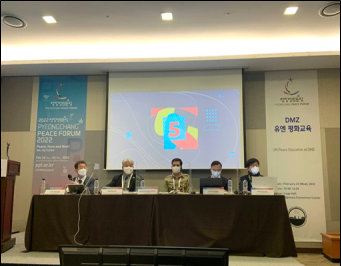 During the next session, The Current Status and Tasks of Peace City, we were very happy to see a familiar face - Kanghyob Shin, director of the Jeju Peace Human Rights Institute WHAT, who is also a member of the Planning Commitee of the World Human Rights Cities Forum. He attended the panel, and spoke about peace as a way to resolve conflicts in people's lives under the theme of "How to View Peace Rights from a Human Rights Perspective.‘ Director’s presentation was an opportunity for us to, yet again, truly understand that peace and human rights are inseparable. 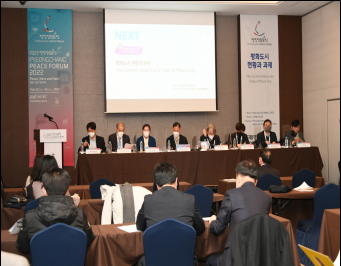 On the second day of the Forum, as many as 23 sessions were held, so, accordingly, the venue was fully set up with more diverse attractions. Amongst them, side events such as the virtual Metaverse experience and a cross-country try-out, which attracted quite a bit of attention being something one does not usually see everyday, were prepared. Alas, the availability of trying out the cross-country experience was very limited, since due to the filming of VIPs for the media there were restrictions on regular participants’ joining, and there was only a designated time for that, so we ended up not being able to experience it. It was the side event that we really anticipated the most, so not being able to try it even for a short while left us feeling somewhat let down.

On the venue, there was another interesting side event called "Five-line Poem for the Peace Olympics," which caused giggles among participants with many witty phrases. The members of our Secretariat all together also made a five-line acrostic poem, and put a sticker voting for the acrostic poem we liked the most.

We were able to rethink the fact that even at that very moment someone was trying hard to protect peace, something most of us usually took for granted. We are, therefore, deeply grateful to those who stand up for the peace that we enjoy in our daily lives, and sincerely hope that standing united, even in separate places, will be the way for peace to continue and all human rights be respected.