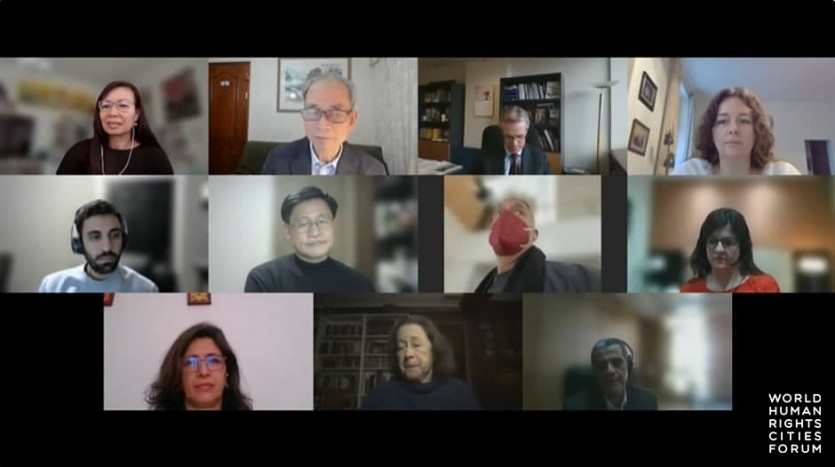 On Wednesday, 1 December, ICCAR Global Steering Committee Meeting was held online. Mr. Magnus Magnusson, Director for Partnerships and Outreach from the Social and Human Sciences Sector of UNESCO opened the meeting with the welcome remarks from UNESCO. Representatives from all 7 regional-national coalitions were present, and the meeting started off with brief presentation of each of the coalitions’ core activities and projects conducted over the previous year.

The updates on various activities were followed by the election of the next President and Vice-President of the ICCAR Global Steering Committee. Mr. Benedetto Zacchiroli, the Committee’s current president, and the President of the European Coalition of Cities Against Racism (ECCAR), was unanimously reelected for another mandate of 2 years, and Mr. Gyonggu Shin, Gwangju Metropolitan City Senior Advisor for HR & International Affairs and Gwangju International Center’s Director, was elected as Vice-President by all the members in unison. Both the President and the Vice-President vowed to try their best to work towards the mutual goals of the Committee through maintaining continuous communication with the Coalitions and helping in moving forward the current and future projects. Among many notable projects mentioned, the most recent pilot project of the Coalition of Cities against Discrimination in Asia and the Pacific (APCAD) expected to begin early in 2022, the ‘APCAD Inclusive City Markers’, was presented in the latter half of the meeting by the project’s lead, Dr. Alan Brown from Chonnam National University Center for Regional Development.

The meeting was finalized with summarizing the proposals for joint collaboration and the communication and advocacy strategy, as well as the announcements of the upcoming events – ‘Master Class against Racism and Discriminations’ to be held at UNESCO Paris Headquarters in a hybrid format on 21 March 2022, and the Global Forum against Racism and Discrimination to be held in April 2022 in Mexico City.