Discussion on the Myanmar Crisis 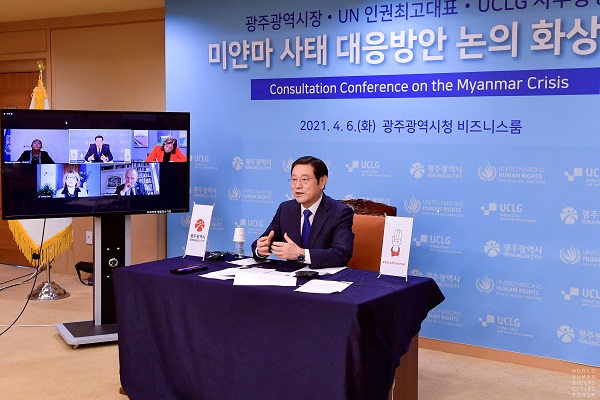 The Gwangju Metropolitan City, the UN Human Rights Office, and the UCLG discussed the prevailing human rights situation in Myanmar and explored the work of each entity in promoting and protecting human rights.

The conference was initiated by Mayor LEE’s proposal to Ms. Michelle Bachelet. And Ada Colau, Mayor of Barcelona and UCLG Special Envoy, shared the visions of UCLG Presidency. Morten Kjaerum, Director of RWI and Ms. Emilia Saiz, the Secretary-General of UCLG, also participated to support the discussion.

Mayor LEE suggested two action plans, requesting that a joint response be taken by the United Nations and local governments around the world so that the painful history of Gwangju in 1980 when people fought in isolation will not be repeated in Myanmar today.”

Ms. Michelle Bachelet elaborated on the measures so far taken by the United Nations and welcomed the initiative of local governments, including Gwangju, to show solidarity to the people of Myanmar. She reiterated the readiness of her Office to provide the  member cities of UCLG with the assistance and support commensurate with her mandate.

Mayor Colau, UCLG’s Special Envoy to the UN, recalled the statement published by UCLG in February and expressed her support to the initiative of Mayor Lee to raise international awareness regarding the situation in Myanmar.