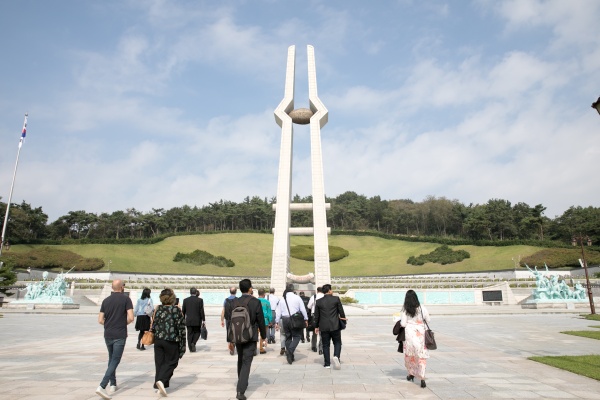 This year marks the 40th anniversary of the Gwangju May 18 Democratization Movement, a meaningful day for Gwangju citizens to win democratization by sacrificing their lives against dictatorship and national violence for 10 days in 1980. In order to commemorate this, the World Human Rights Cities Forum, which has been held every September and October, was scheduled to be held earlier in May, but the spread of COVID-19 led to the postponement of the event in consideration of the health and safety of participants in priority.

Mayor of Nuremberg (Germany), San Antonio (USA), Ariana (Tunisia) and Grigny (France), were scheduled to attend the 40th anniversary and the 10th World Human Rights Cities Forum, but sent messages to celebrate the anniversary as the COVID-19 pandemic made them difficult to attend the event.

Marcus Koenig, Mayor of Nuremberg, said, “All democratic movements in South Korea have originated from the May 18 Democratization Movement, paving the way for the freedom of today’s generation.” And he continued, “I think the past legacies of the two cities have given us a task to respect and protect human dignity and human rights. I think the past legacies of both Nuremberg and Gwangju have given us the task of respecting and protecting human dignity and human rights. To that end, the global network of 'human rights cities' is important, and I am grateful that Gwangju holds the World Human Rights Cities Forum every year to help cities around the world gather and learn about human rights.”

Ron Nirenberg, Mayor of San Antonio, said, “The impact of the May 18 Democratization Movement on the development of Korean democracy today is echoed in the minds of many people and the courage not to kneel in violence remains a shining role model.” He also mentioned, “San Antonio and Gwangju share an indomitable spirit, and have won monumental and revolutionary movements and established themselves in history.”

Fadhel Moussa, Mayor of Ariana who also was a democracy and human rights lawyer said, “I am proud to be able to celebrate the 40th anniversary of the May 18 Democratization Movement triggered in Gwangju and affected the entire South Korea. We express our solidarity to strengthen democracy and cooperation based on the spirit against COVID-19, which the two cities have prioritized.” In addition, he said, “I am also cherishing the white gloves that I used during my visit to the May 18th Memorial Cemetery and the May 18 music box that I received from the 2019 World Human Rights Cities Forum.”

Philippe Rio, Mayor of Grigny and the president of Mayors for Peace in France said, “I am grateful that Gwangju has realized democratic values through the World Human Rights Cities Forum. In the face of the COVID-19 pandemic, cities should reflect not only human rights but also social issues and peace first in public policy."

In response, LEE Yong-sup, Mayor of Gwangju said, “I am very grateful that mayors of overseas human rights cities have supported the historical value of the May 18 Democratization Movement and expressed respect and solidarity with the courage of Gwangju citizens who have developed into human rights city. I will do my best to fully investigate the truth of May 18 and play a central role as an international human rights city of Gwangju.”